Synchro said:
From what I understand, it used a sealed container with a liquid inside, which was used as a conductor for the signal and the sloshing of that liquid determined the strength of the signal passing out of the device. A motor controls the speed of the motion of the drum containing the liquid. I have no idea of how they controlled the depth, and I couldn’t find a schematic so I can only confidently state that it was a combined effort of the Bedrock Quarry and Spacely Sprockets.
Click to expand...

This would make it very similar to the old oil can echoes...
B

I have a catalinbread Valcoder, cool but very sensitive to setting adjustments, too much or too little. It makes a nice Supro sounding boost, but you have to ditch the tremolo unless you want maximum annoyance from both effects

ruger9 said:
This would make it very similar to the old oil can echoes...
Click to expand...

Similar principle, but the fluid is non-viscous, so it responds much differently. From the ZZ Top song, it sounded good, but nothing all that unusual.

My next field of research may end up being Harmonic Tremolo.

You might like to look for the Sury Industries "Surfy Trem", which is a Blackface/Brownface Vibrato, or the "Surfy Vibe". This one is supposed to recreate a Magnatone Vibrato and has a switch to add a feedback path, so it's a kind of phaser, more or less. Both seem to be quite versatile for two knobs and a switch plus footswitch.
Last edited: Dec 1, 2022

Floo said:
You might like to look for the Sury Industries "Surfy Trem", which is a Blackface/Brownface Vibrato, or the "Surfy Vibe". This one is supposed to recreate a Magnatone Vibrato and has a switch to add a feedback path, so it's a kind of phaser, more or less. Both seem to be quite versatile for two knobs and a switch plus footswitch.
Click to expand...

It’s on my short list. Do you have one? My only concern would be that there is no volume drop when the pedal is engaged.

Synchro said:
Do you have one?
Click to expand...

Not yet, but I'm in the process of getting a new amp without tremolo plus one of those pedals. My choice would probably be the SurfyTrem, any demo I've heard was convincing.

Synchro said:
It’s on my short list. Do you have one? My only concern would be that there is no volume drop when the pedal is engaged.
Click to expand...

The Supro Tremolo pedal has a switch for Harmonic mode, and it has a drive control... not only will it boost volume (unity gain/volume when at 0), but will also add some drive... very cool...
B

Can't help thinking it's an effect that works well even in a low cost economy version. Ive had great results from cheapo models, including a Danelectro yellow plastic thing....cheese and jam or something

I have this one too.

Synchro said:
Is that a tremolo pedal, or a supercomputer? That is a bunch of features! I use a humble Boss TR-2, usually on the sine wave profile.
Click to expand...

Couldn't see the video in the OP, so not sure which trem it was. I like the Boss TR-2 also. Built solid as a rock and goes from triangle to square wave and all points in between. Oh and sounds great too. However, whenever it's practical, the vibrato/tremelo on a Brownface, Blackface or Silverface amp is even better. 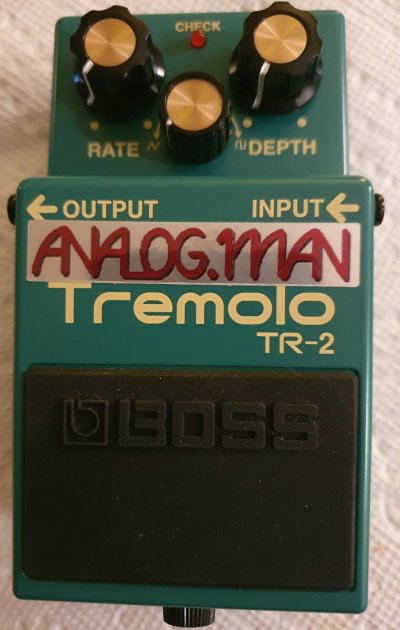 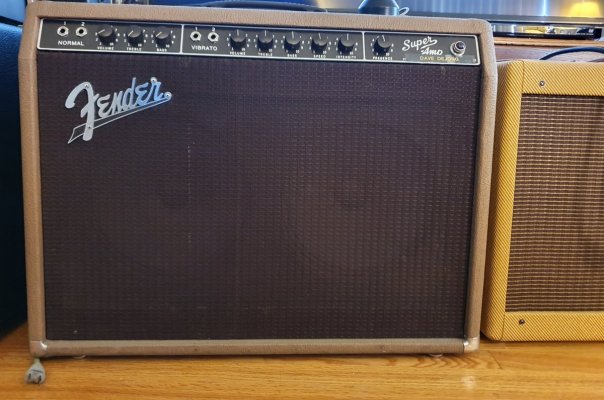 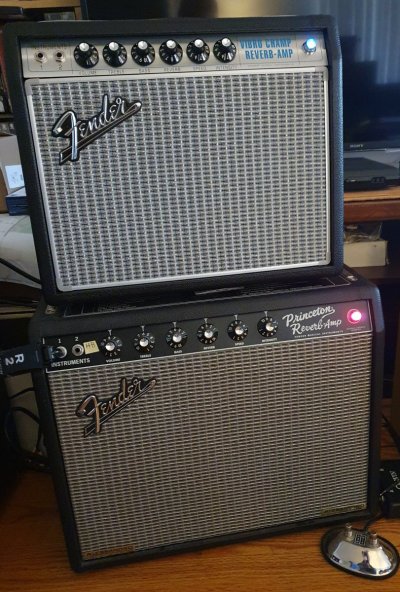 Mine is a Danelectro Filthy Rich. I was in a local music store, and they had a Danelectro pedal display. I didn't have a tremolo, so while I was checking out a Fender Vintera Strat, I plugged into the Filthy Rich. Being new to finding the tremolo sound that I want, this one got me going in the right direction. I got this to go with my Vox AC10. My Fender Deluxe Reverb Reissue already has a good onboard "tremolo" called a "vibrato." 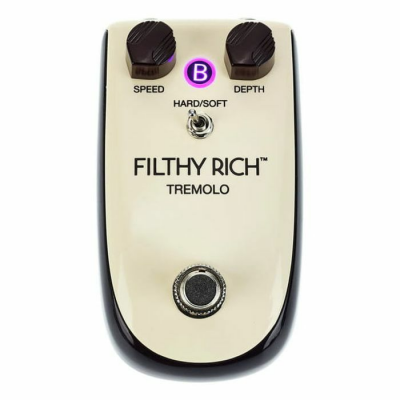 Recently, this one caught my ear: 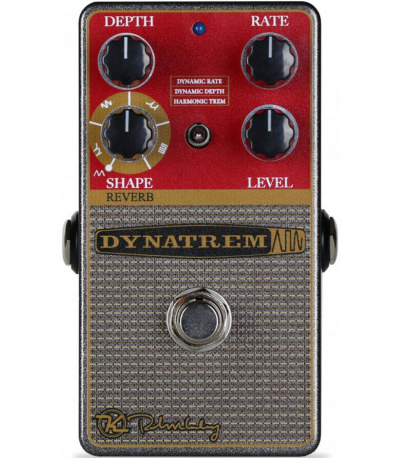 Bought a brand new Swamp Thang and returned it... the quality of that pedal was questionable. Just bought a Catalinbread Valcoder (in route) I'm pretty stoked about. Anyone try / have the Nailhead?

I have an EHX Pulsar. The one hcsterg has, too.

It's pretty good, but one thing I consider to be off a bit - in stereo mode, only one side gets the full treatment, meaning it swells up and down ... while the other side is simply shut off and on, if I remember this correctly ... haven't had much time lately, played a lot less than I wanted and haven't used it in a while ... but I will, just now, employ it and fiddle around a bit, still 39 minutes left until nocturnal quietism is required, so I may wake up the early sleeping neighbours ... weekend ... retired, they, anyway ... anyway, as I don't use it as a two channel that often, I'm almost fully pleased by what it offers, but that one channel being treated to the best of their knowledge, and one not so much, I find off a bit.

rockinforJesus said:
Hard to beat the Flint for all it offers

And the new v2 is so much more useful for someone like me who wants to use many of its sounds at a tap of the foot. V1 was my main trem and I used all 3 sounds. Harmonic with an octave pedal was awesome. Optical with an envelope filter was a barrel of laughs. Loved having different reverb options to add to the amp always on subtle reverb.

Now I use my amp bias trem which I love as the trem does not swallow the note, makes it more useful for leads. I need to experiment with the trems in my H9.

I don’t use one much at all, but will need it for playing in the musical Grease at my kid’s high school soon. A lot of the songs use a bit of tremolo for that kind of dreamy vibe in some parts. I have the little pedal version of the Keely Verb O Trem which should do the job well enough. Plenty of natural acoustic reverb in the auditorium so I won’t need to add much of that. It also has a vibrato and harmonic trem option, but I think I will stick to the regular trem setting for this show.

I have been interested in the Fender Tre-Verb, that one has a nice stereo harmonic tremolo.
Last edited: Dec 20, 2022 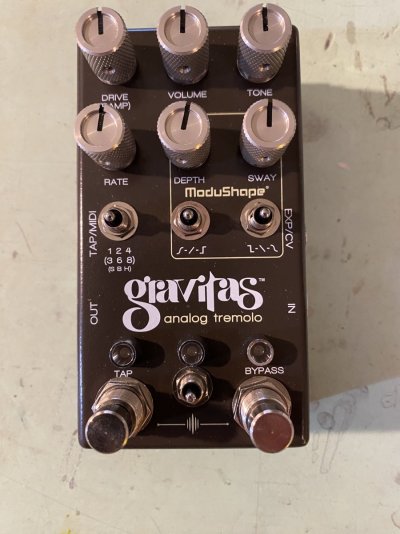 Have had this for a week and i haven't even had time to plug it in yet.
Just got back from the UK with a Silver Falcon and i haven't had a chance to plug that in either! Looking forward to having some quiet time over Christmas. Quiet time for me to make some noise.

I have owned two trem pedals over the years. My first was the Behringer Ultra Tremolo and the second was Boss TR-2.

I actually liked the Behringer better because it had harder clipping for an intentional lofi sound.

I've never been a huge trem user only when I take a stab at Spaghetti Western sounds. I currently don't use one. My experience amp trem always sounds better and if I find myself needing it I'll probably buy a second amp versus a pedal again.

I've been trying out several trem pedals over the last few months and settled on the Mr. Black Deluxe Plus with harmonic tremolo. Blends in beautifully with my setup. 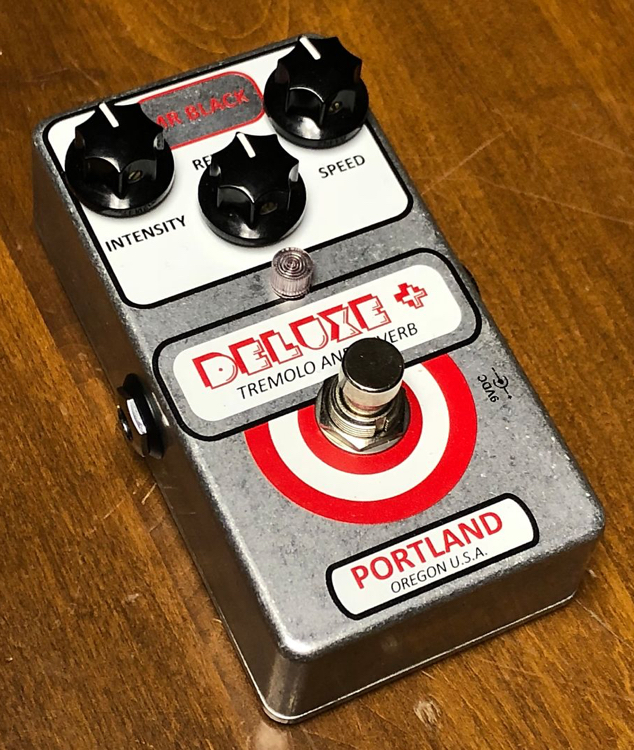 I don't use tremolo much, but last year bought a used Keeley Verb o Term for good price.
Works for me and reverb too! 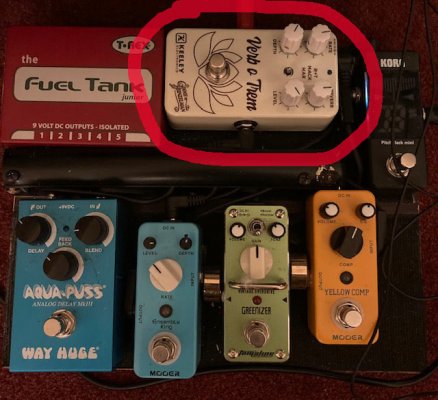 I just (yesterday) received a Source Audio True Spring. My motive in buying this was to access the various forms of tremolo it has available. Early tests have been quite promising. I’ll be posting a road test in the next few days.
E

Flower Pedals Dandelion trem is a fantastic harmonic trem
Diamond & Empress both excellent with tap tempo and lots of wave forms and options.
Voodoo Labs is a great trem on the cheap.
You must log in or register to reply here.
Share:
Reddit Pinterest Tumblr WhatsApp Email Share Link