The 12 or 14 fret neck joint question is an interesting one. I had Nationals in both flavours and the 12 fret did take some managing to play slide up the neck but the improvement in tone over the 14 fret version made it all worthwhile. if I could only keep one, it would have been the 12 fret version.

I have a Michaal Messer Lightning. It's a lovely brass bodied (I believe) resonator based on the old Style O (I think..). Yes, it's heavy and no, it doesn't have a pickup (so I haven't gigged it yet), but I play finger-picking blues, slide, and gypsy jazz on it. Far from being a one-trick pony. In a way it's a bit like having a purpose built gypsy jazz guitar or an archtop - yes you could get by playing these style on almost any guitar, but it's nice to have the real thing.

Bkat said:
I made the fatal mistake of comparing one like the Gretsch G9201 back-to-back with the Mule.

The ones Highroller mentions are OK and no criticism of anyone who owns them. But as I've aged I've come to learn I'm happier with 2-3 really nice guitars than a bigger herd of mid to lower range ones. That's just me. So I know if I bought something like the Recording King I'd be forever kicking myself. And I tell myself I feel more commitment (obligation?) to play an instrument that was a bit more painful to pay for.

I go through this every time. Like when I bought my 6120 I kept telling my wife I'd be fine with an Electromatic. Nothing wrong with them. To which my wife just rolls her eyes and says, "We both know which one you're going to get. Just buy it!!!"
Click to expand...

Now, if we're talking "cheap" here, I've been getting by with an under $200 Jay Turser Resonator for years. More electric than resonator, it nonetheless puts you in the ballpark of a resonator sound when you ask it to. Which for the money, is about all you can ask from it. 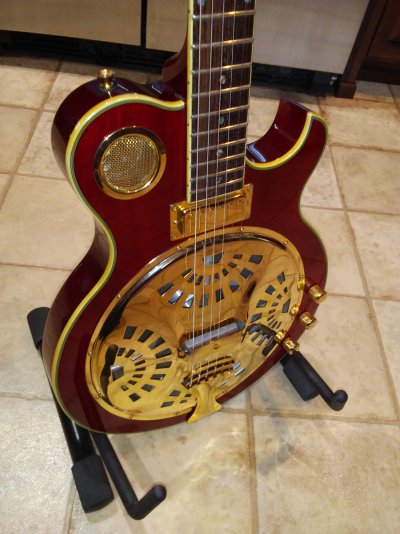 I've always sort of admired the dumb thing actually. It's not a bad cheap guitar! But no doubt either the Honeydipper or the Swampdog would be a nice upgrade.

These things are always relative, just depends on what your priorities are and where you want to sink your money. I've never regretted a single one of my "pro level" purchases. But then again, those are ones I play every day. I have my doubts a reso will ever be that for me.

I bought a resonator and was also wondering if it would ever get used. I have 2 pro gretsches and a falcon rancher. All of them are gigged and if they don't get gigged then I sell them. So I had 2 ranchers as someone fell onto the stage and broke my white one, insurance bought me a black one. But it never played as well so I got the white one fixed. That made the black one unused. So I sold that along with a gibson that I used once in a studio for a song I wrote that used slide guitar, then I thought, I like the sound of that song, and thought I'd fund a gretsch resonator with them 2 guitars. Picture below is the cover art of the released song that used the gibson, not the resonator. So now I play that song live on stage with the resonator (a 3 guitar gig now). Trick is, I'm trying to find at least another 2 songs to play on resonator that suits the 'neo-rockabilly' sound we have and that's not so easy. But that is the way I justified getting a resonator, sell guitars to fund it and have a use for it. Otherwise, as you say, it'll just hang there unused. 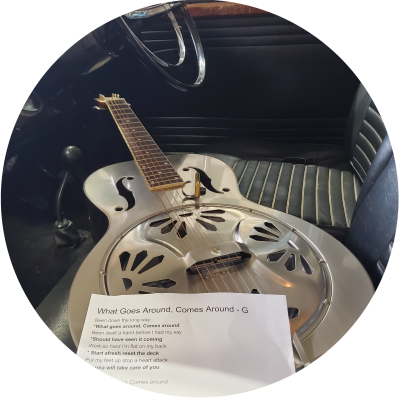 My guitars
Gretsch blue harbor 6120 setzer; Modified to have a tone switch and cast my own hardware.
Jet, black. Had this a long time and use it to play rock and roll stuff as well as some Gene vincent songs in a more traditional rockabilly band.
White falcon rancher, gorgeous guitar, had it a while now and it plays beautifully as well as looks the part. Needs some modifying though, chrome volume control, G stamp, graphics to cover damage, fret markers you can actually see etc..
Gretsch resonator, the steel one.
Dean acoustic, wife bought it for me decades ago, use it in studio as it has a lovely sound
Stagg banjo, used it to record some different sounds, but don't gig it.
Gretsch travelling willbury, I keep this in my motorhome, when the wife and I travel about, it goes with me. Coupled with the fender mustang micro, it's good enough. And has been all over europe.

Falconetti said:
The 12 or 14 fret neck joint question is an interesting one. I had Nationals in both flavours and the 12 fret did take some managing to play slide up the neck but the improvement in tone over the 14 fret version made it all worthwhile. if I could only keep one, it would have been the 12 fret version.
Click to expand...

Depends on how you tune, at least in my world.
Open tuning, sans capos rarely calls for going hiigher than the octave. If you capo, is different.

I just can’t justify the price of a National with cutaway.
So many toys, so little time.

Runamok said:
12 fret is king. I am envious.

Depends on how you tune, at least in my world.
Open tuning, sans capos rarely calls for going hiigher than the octave. If you capo, is different.

I just can’t justify the price of a National with cutaway.
So many toys, so little time.
Click to expand...

I used to take both 12 and 14 to a gig and a Telecaster !! Must have been nuts. 12 fret was used mainly in Open G (for live work) to channel my inner Robert Johnson. 14 fret was either Open D or normal tuning so i could get all Elmore James.

Songs in the key of A on the 12 fret occasionally got pretty fruity but it’s the Blues after all and there is supposed to some pain involved but hopefully not for the audience.

The cutaway National is called a Resorocket i believe. It weighs the same as Apollo 11. Young man’s guitar.

Yes, I have had 3 resonators, and the one I kept is the "cheapest" one, a Rogue Spider resonator. To me, it's loud and sounds fantastic, not "cheap."
I bought it used off the 'bay at least 10-15 years ago for about $80. It was for my dad, but I've sort of inherited it.
My Dad is very old now, and only plays his Seagull cedartop.

I do NOT play the blues, except at guitar jams/circles, if someone else's turn results in a blues song.

I play what I always play, rock and new wave.
I do a couple Kris Kristofferson or John Denver songs with my Dad, but overall, I do originals, hard rock, new wave and alternative songs with my regular acoustic guitars and my reso!

* Rule of thumb: Any kind of music can be played on any kind of guitar. 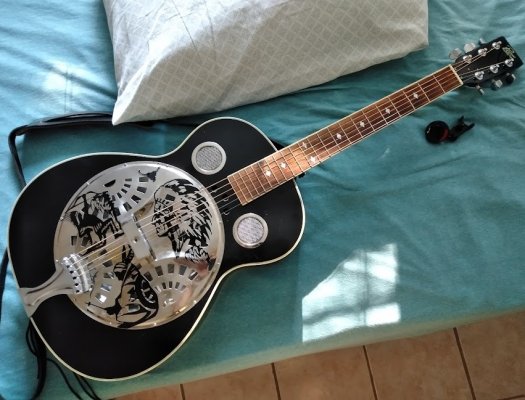 Somehow I always fancied my playing benefitting from a resonator(sound).
So now I'm on my 4th which doesn't get played.

It's like the universe is trying to tell me something(they should have spoke up when I got my first guitar sheez).
The first was a Fender, it was ok but not as advertised, sold that. Got a used Republic which was retrofitted with a cone that was relic'd on a gravel path. A large scratch revealed brass, but Repuplic advertises it as a metal body. They shrugged and told me I must have one of those unicorns.
Then a got a wooden Gretsch Alligator, cause different right? Worst fretjob I've ever seen. And the last one was an Aiersi which arrived with a broken neck. After a tiresome email exchange I eventually received a neck replacement which seems to have been made by one of the salesperson's kids. Ah well maybe the 5th one is a charm?

My little brother has a 1930s Duolian and it is without a doubt the coolest guitar I’ve ever played. I’d love to have one. The aging on his is absolutely beautiful. 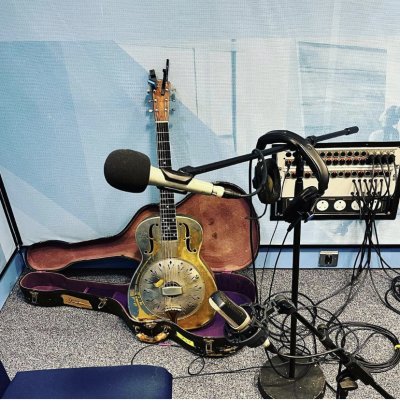