New to guitars, but very enthusiastic

Hi! I've posted a few times and am very grateful for the welcomes there, but haven't done a full intro.

My organist mother got me into making music very early, but all pianos and choirs. Never stuck with another instrument until (to my complete surprise) I bought a ukulele in a daze during an emotional rollercoaster, and then a classical guitar a few months later in response to another very trying period in my life. Absolutely loved them both but learned a little Bach, and then didn't pick them up for years. Still, that's what I instinctively reached out to.

Then last November my wife and I got Chinese food on black Friday next to a guitar center, where I thought I'd JUST take a look, and walked out with a stratocaster. I've played every single day since.

I realized it's the first time I'm playing an instrument that is used in the kind of music I actually listen to, and it's completely changed my relationship with music, theory, practice, all of it. Now I'm WRITING. Never even considered that before!

I started posting on here because I loved the strat's comfort but not the sound, so I've been involved in an absurdly consuming search for a next instrument, and Gretsches kept coming to the top. I've tried to narrow it down to the one perfect instrument, but I think I'm going to go with a black Jet with a Bigsby, and also a black Les Paul. Love the Jet's look, feel, and sparkle -- love the LP's enormous bass chime.

But I still prefer to post over here because y'all have been very helpful and man, the Les Paul forum is kind of mean!

I play mostly rock, working on Chuck Berry, White Stripes, Leadbelly via Nirvana, and do really enjoy the George Harrison homage in the Jet.

And, I would love to do a meetup or retreat, if there's one in the DC area!

Welcome. I’m no one to judge, but I believe you’re better off here and you’re probably better off with a Gretsch too. Black top Filter Trons will get you close enough to where a LP takes you and there’s nothing that will bring a LP close to Gretsch territory. I have two Strats and a 6118T Annie and others. I’m not a rocker so like I said, I’m no one to judge but with so many styles you want to play that a Jet covers…. that a LP doesn’t….

Your search for the your next guitar will repeat itself many times over the next few years if you stick with guitar. Needs and tastes change as we progress and we tend to expand our playing/tonal palette over the years.

Welcome and enjoy the hunt.

So, you are now seeking a second guitar...a mere 8 months after your first. You've been bitten and the disease has already taken effect.

Here's my Big Four. You can see I really have all tonal bases covered with these. And that's the strategy you should have. Purchase a few guitars that will cover much tonal ground. 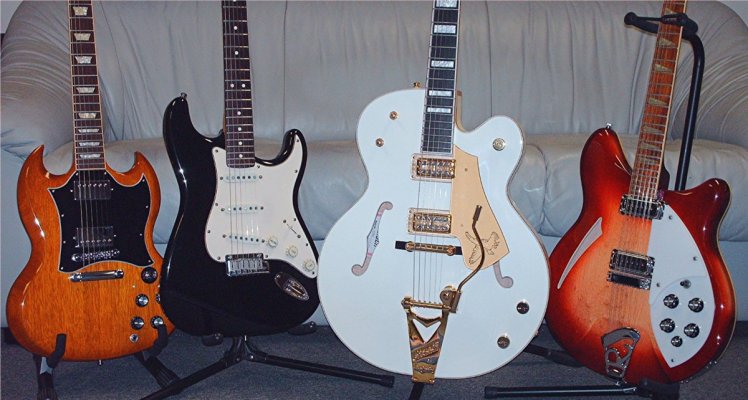 I do prefer the Jet overall, but there's nothing I can find -- other PAF guitars included -- that can *quite* get the full thickness of a Les Paul. And I guess I'm just a sucker for bass. (Maybe because I am one.)
S

I know, I'm sure I'm kidding myself to think that I'm done. The hunt has been a huge amount of fun, it's true, but it's taking up all the time I used to use practicing! I'm looking forward to getting back to nailing solos for a while.
S

I do prefer the Jet overall, but there's nothing I can find -- other PAF guitars included -- that can *quite* get the full thickness of a Les Paul. And I guess I'm just a sucker for bass. (Maybe because I am one.)
Click to expand...

You can get a warm rich tone out of a humbucker Les Paul.
S

Oh yeah, I got bit hard. And that is a good looking collection ...

While I continue to waffle about this LP, I think the next thing I have my sights on is a metal-body resonator, probably a Gretsch Honey Dipper actually. Aside from that though, I'm going to TRY to just learn to love this Jet, see if I can develop a strong relationship with it. I feel like I'm spending more time picking up and putting down guitars, than I am playing!

Hi. How's it goin'?
Sounds like you've got the bug.
Enjoy it!

When I decided to learn to play and bought my first guitar I ran across three or four different videos touting "the 4 (or 5) guitars all players must own" or something like that. Now with more experience, I agree.
Random order: a Tele, a Les Paul, a Strat, an ES-335 or SG and sometimes a shredder. Each has it's own sound and feel and style that cannot be duplicated by the others.
D

As far as a black jet is concerned, the G5230T is one of my favorites. If you can find one with the BlackTop FilterTrons, it may just be what you are looking for.

Sorry, I'm a little confused. You've posted a pic of both a Jet and an LP, but your text sounds like you're still shopping for them. Is it a matter of deciding to keep something you've already bought?

That answer's easy - Keep 'em both!

And welcome to the forum!
S

Highroller said:
Sorry, I'm a little confused. You've posted a pic of both a Jet and an LP, but your text sounds like you're still shopping for them. Is it a matter of deciding to keep something you've already bought?

That answer's easy - Keep 'em both!

Yeah, that's right. I found a good Jet, which has just passed the 45 day mark at Guitar Center, so I'm proud to say I officially own it! But the QC on the Lester was a little off, so I'm still hunting. Out of all the things I've gotten my hands on though, they're one of the handful that stuck out as really special. I like *big* sounds, like the whole room vibrates when you hit a chord, and that did it.