drmilktruck said:
The cup runneth over for blue guitar lovers. I was looking a recent guitar magazine and saw a lot of adverts for blue guitars. When I started my cerulean guitar obsession, there were very few. Congrats on the Jr sized blue D-Angelico.
Click to expand...

My latest blue one!

"See the man with the blue guitar,
maybe one day he'll be a star."

I am also a fan of blues. I have 3 blue guitars (non-Gretsch) 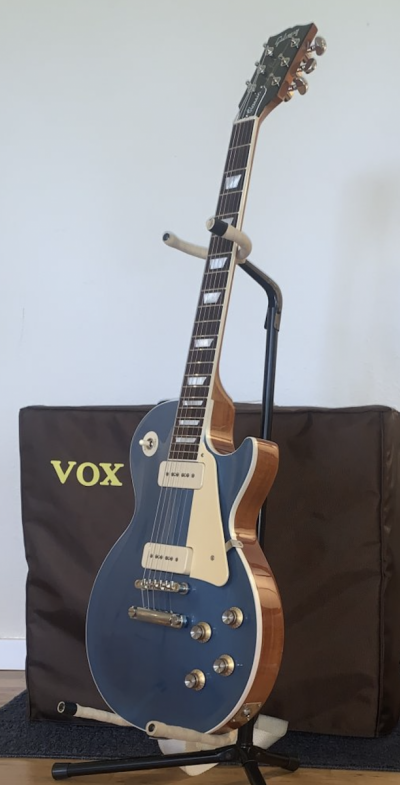 Emergence said:
That’s a well travelled guitar. Did it come with a passport in the case candy?
Click to expand...

It's acquired more frequent flyer points than I have in 2 years!

audept said:
It's acquired more frequent flyer points than I have in 2 years!
Click to expand...

I’ve been to Oz twice on miles. The first time was in the back of a Qantas 747. The very back. Never again. The next time was added onto a New Zealand trip, again on Qantas, but that time up front. Melbourne to home on Long Island is 25 hours door to door. That’s not a trip to make in steerage. I hope your blue guitar enjoyed the flight.

Emergence said:
That’s a well travelled guitar. Did it come with a passport in the case candy?
Click to expand...

It needs a resident permit I presume

Congrats audept, she's a real beauty, and the specs look good, too!

Congrats. Gotta admit to suffering some gas due to D'Angelico.

Congrats on that fine looking guitar. Great color too. Enjoy and HNGD.

i was eying that guild myself, until the 5427 came out in midnight sapphire…

Thanks! I was really just shopping for a cheap Epiphone, but that one had been listed for a while, then dropped the asking price, so I had to splurge and jump on it! It really shimmers in the light too, not quite a Gold Top, but beautiful in it’s own way.

UPDATE:
I collected the guitar back from my luthier this morning after a setup and checkout. It now plays beautifully and the pickups sound incredible, similar to the PAFs in my 1962 SG Les Paul, but open and airy with a lovely chime and great articulation. I couldn’t stay long, so I forget to checkout the split-coil setup which I will do later this week when I can crank them through a real amp.

There were a few surprises though: My luthier said that this guitar showed signs of being plek’d at the factory but there were a few disturbing discoveries:

The screws holding the tuners in place were not fully screwed in, the luthier said that the holes had not been drilled deep enough, so he took the screws out, re-drilled, and then screwed them in properly.

The bridge posts had been placed a little farther back than absolutely optimal, so that some bridge saddles were adjusted all the way forward towards the neck to get best intonation.

The nut slots were not cut deep enough so the luthier fixed that and now it has a low, fast action. The slim-C neck is exactly what I prefer and feels so comfortable.

So now the guitar is amazing, better than the Premier DC Mini I already have. What is interesting is that the made in Indonesia budget model had absolutely no flaws, while this more expensive made in Korea deluxe model had better hardware and electronics but was released from the factory with some minor problems that needed a luthier’s attention. This was a complete surprise to me, I had expected a higher attention to detail from the Korean-made guitar. However, I’m loving the guitar now that it has been adjusted properly.

I can’t help thinking that the Limited Edition top-of-the line model may have been better off made in Indonesia!

Do they play the same, same thin neck, etc?

I saw this cool blue 12 string made for Robert Lockwood Jr at the RnR HOF: 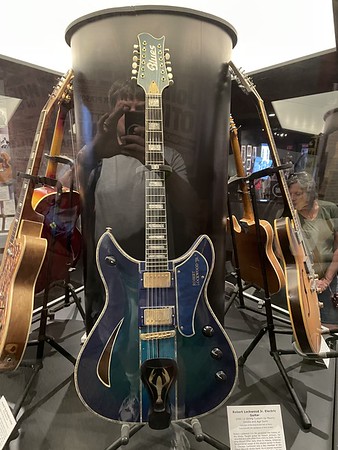 There was also this one, made for a famous Minnesotan. (Missing a few parts though.) 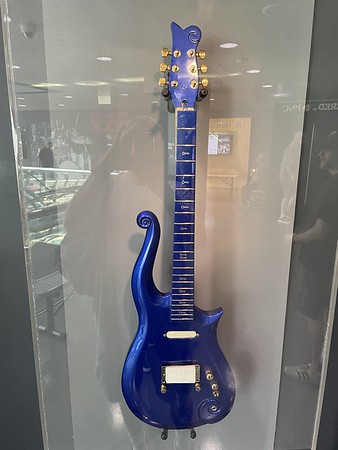 That's a sharp guitar.....a shame about the problems...but, it seems like workmanship isn't anyone's top priority anymore.....at least you had someone close by who could fix all the issues! Now get to playing! ;-)

Almost identical necks -slim-C shape, similar frets, nuts are now the same after my luthier cut the slots a bit deeper on the Deluxe. Pickups are way better on the Deluxe (Seymour Duncan Antiquity Retrospec'd (no wax potting)
You must log in or register to reply here.
Share:
Reddit Pinterest Tumblr WhatsApp Email Share Link