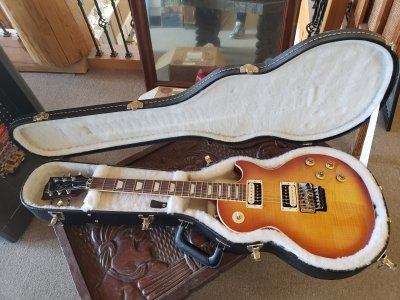 I pulled the trigger. I bought this 2014 Gibson Les Paul Traditional PRO II Floyd Rose in "light burst" from a friend. He was selling off some of his brother's (also a friend) collection after he passed away from cancer a few years ago. Eric was left with something like 140+ guitars and he's not a musician. Drew was the musician. And he was really good.

Anyway, it was a deal I couldn't refuse. It definitely is in need of new strings and a good spa day. Right now, I'm letting a nice coat of lemon oil soak into the rosewood. Man that fretboard was dry. This thing is thirsty. 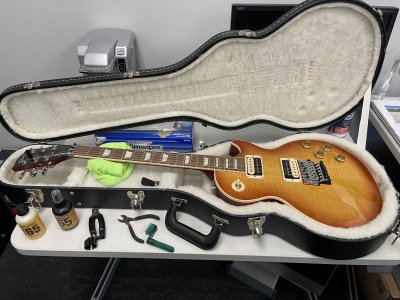 This is the first Floyd Rose-equipped guitar I've owned so I know I'm in for a "treat" when I replace these strings soon. Normally with a hard tail, I'd just cut the strings and oil the fretboard but I don't want to find out what happens when you take all the strings off a Floyd.

I mic'd the strings and I'm fairly certain that these Dunlop electric 10s are about close to what was on it. I guess we'll find out! 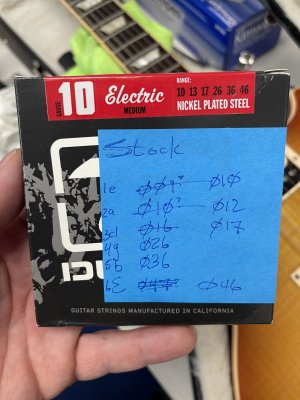 Doing a bit of research (and a few questions asked around here) I found some info on it. 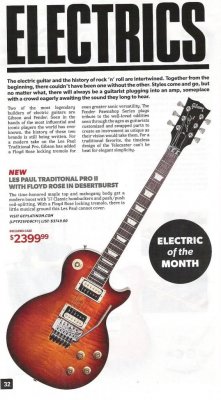 Congrats! I recall the earlier thread. Glad to hear you got it!

I have to chuckle that Gibson labelled it a "Traditional" when it's got that very un-traditional Floyd Rose on it, at least by LP standards. Outside the box thinking for sure!

Highroller said:
I have to chuckle that Gibson labelled it a "Traditional" when it's got that very un-traditional Floyd Rose on it, at least by LP standards.
Click to expand...

Yeah...there's nothing "traditional" about this LP. That's part of what drew me to it. It's not the standard LP.

Congrats on the new geet !

At least it stands a better chance of staying in tune with that Floyd tremolo.

Craig Encinitas said:
At least it stands a better chance of staying in tune with that Floyd tremolo.
Click to expand...

Hahaha, yeah. A Gibson friend of mine says his LP goes out of tune just looking at it. This one was in damn near perfect tune when I tried it out and it probably hadn't been played in 3 years.

Nice to keep your friends music alive . Congratulations and enjoy

Nice one! Is it very heavy?

Although a Floyd on a LP looks a bit strage to me I really think that you got an incredibly versatile guitare here. And it looks great, too!
Congrats.

It's a battle club. I think it's around 10.5lbs or about 5kg for you metric types. Very different from my Ibanez SC which is by far the lightest solid body I own. And what's crazy is this is supposed to be a weight relieved model. I can't imagine what it would have weighed without that.


loudnlousy said:
Although a Floyd on a LP looks a bit strage to me I really think that you got an incredibly versatile guitare here. And it looks great, too!
Congrats.
Click to expand...

It does look a bit off. Every player who's seen it so far makes a comment about the Floyd. I've probably heard ~"I didn't know you could get a Les Paul with a Floyd"~ about 4 times in the last few days either in person or from friends I've sent photos to.
Last edited: Jan 25, 2022