I'm still trying to like the pickups. Oddly unbalanced volume me between top and bottom strings in spite of adjustment. They're very low output and blat when raised to be close to the strings. I hope I'll find a way with them, I'm a fan of old recordings made with this style

Beautiful guitar, Svenslim! And congrats on hitting the Big 6-0 !!!

Congratulations, and Happy Birthday!
I'm turning 60 tomorrow while on work travel. No NGD for me...

Same here. There are two guitars I would like custom made for me. One is a Rickenbacker Capri, which is theoretically in progress, but I've seen no evidence despite patiently waiting for more than a decade. The other would be a Bigsby. Maybe if my Capri ever materializes, I'll start looking into a Bigsby build.

svenslim said:
NGD – A Bigsby! I recently had my first new guitar in a decade delivered. It is a Bigsby no less! Hand-made by an European luthier to my specifications based on a previous build he had done. All woodwork including bridge and nut are hand made. The only thing he did not do himself would be the strings, the Kluson tuners, Fender Tele-style pickup selector, Gator case and the pickups –hand made Bigsby replicas by Mojo Pickups in England. A bit about Paul A Bigsby:

Bigsby made the first proper custom-ordered electric guitar. Not a test thing, not a “what-happens if…”-thing: a fully playable guitar for a working musician who wanted to cut through in a hillbilly band, that was Merle Travis. Travis, who today is remembered for the “Travis picking”, designed the shape and form for the guitar, inlcuding the playing card position markers (which only his guitar had), the curls and the cutaway, string-holder and ornamentation and everything.

He lent the guitar to Leo Fender for a week, an often given reason as to why the Telecasters came with string-through solution and six-on-a-side tuning pegs, and later the Stratocaster came with a headstock strikingly close to Bigsby´s. Mr Bigsby was not amused.

Around two dozen Bigsby electric guitars are known to exist, all were made different to the others in some way. The very first two had one pickup, the rest two pickups. From 1949 on all guitars built were called a “Standard” model, which in Bigsby´s language meant “not a steel guitar but one you stand up and play”. At least three of them were double-necked with a 6-string guitar and a mandolin on top with different number of strings. He also made lots of steel guitars of various types and some mandolins. But if anything, Bigsby are still remembered for his true vibratos. Most of the owners of his guitar had him put on a hand-made vibrato as they were made. Thus the first 10 or so Bigsby vibratos ever manufactured are still on the original guitar they were made for.

My guitar is a mixture of mostly the 1948 cosmetics and the 1949 standard features, with other bits from later years added. I decided against some things, like having my name on the pickguard.

I have used it a couple of times in rehearsal now and I am happy to say that it is a delight to play. The fretboard and the neck is so easy for the fingers, the pickups are much more powerful than I expected. It will make its first gig Saturday May 21 when we play at for some 45000 runners passing us half way through a half-marathon. We will play for hours so it will be put to good use.

Getting a guitar like this has been on some kind of bucket list for years, unreachable until now. Today is my 60th birthday and I couldn´t be a happier owner of a Bigsby replica, made just for me, to me! /Jonas
Click to expand...

very nice build to the original Paul Smith first made for Merle Travis! 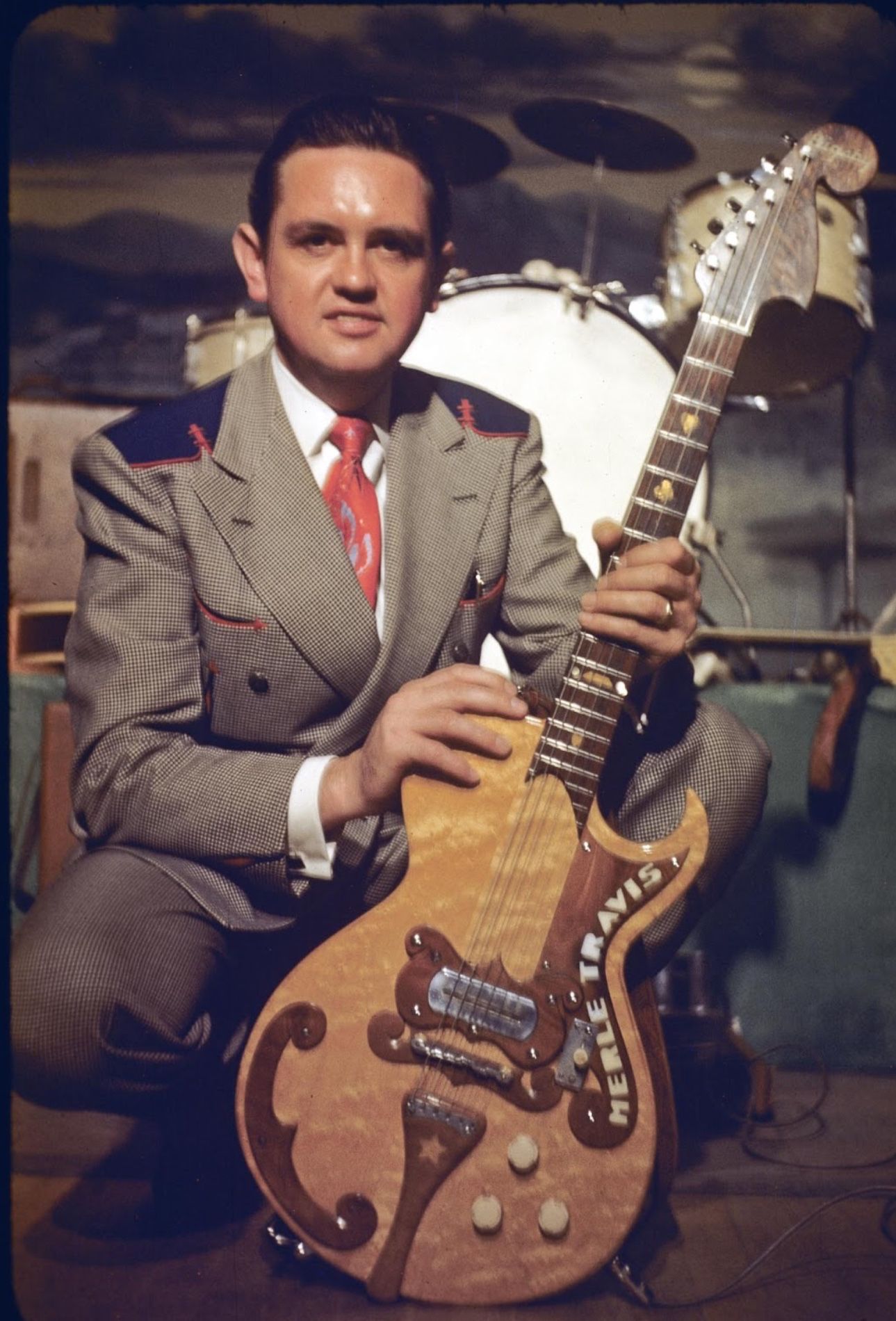 Similar to our USA Dr of all things Bigsby; TK Smith. I do have my questions though about any pickups mojotone builds as far as being authentic Bigsby. Lots of pkup builders make bigsby style pickups that look like
the real thing, but TK Smith took originals and replicated them in materials and build. That said, no one owns "bigsby" really. Gretsch technically does but has never come close in any build that is an authentic creation.
TK Smith for sure has sparked a revival in Europe as well as Japan. I have a friend in Japan making really cool double necks. 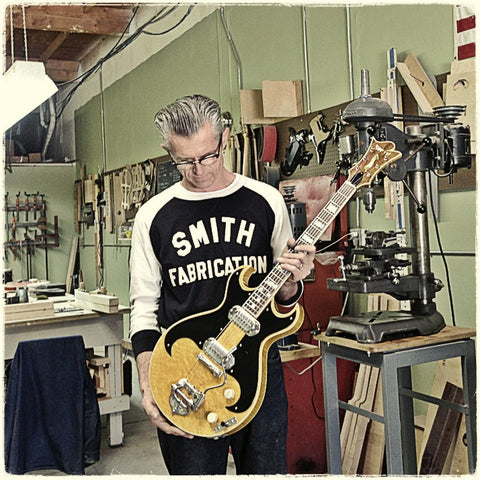 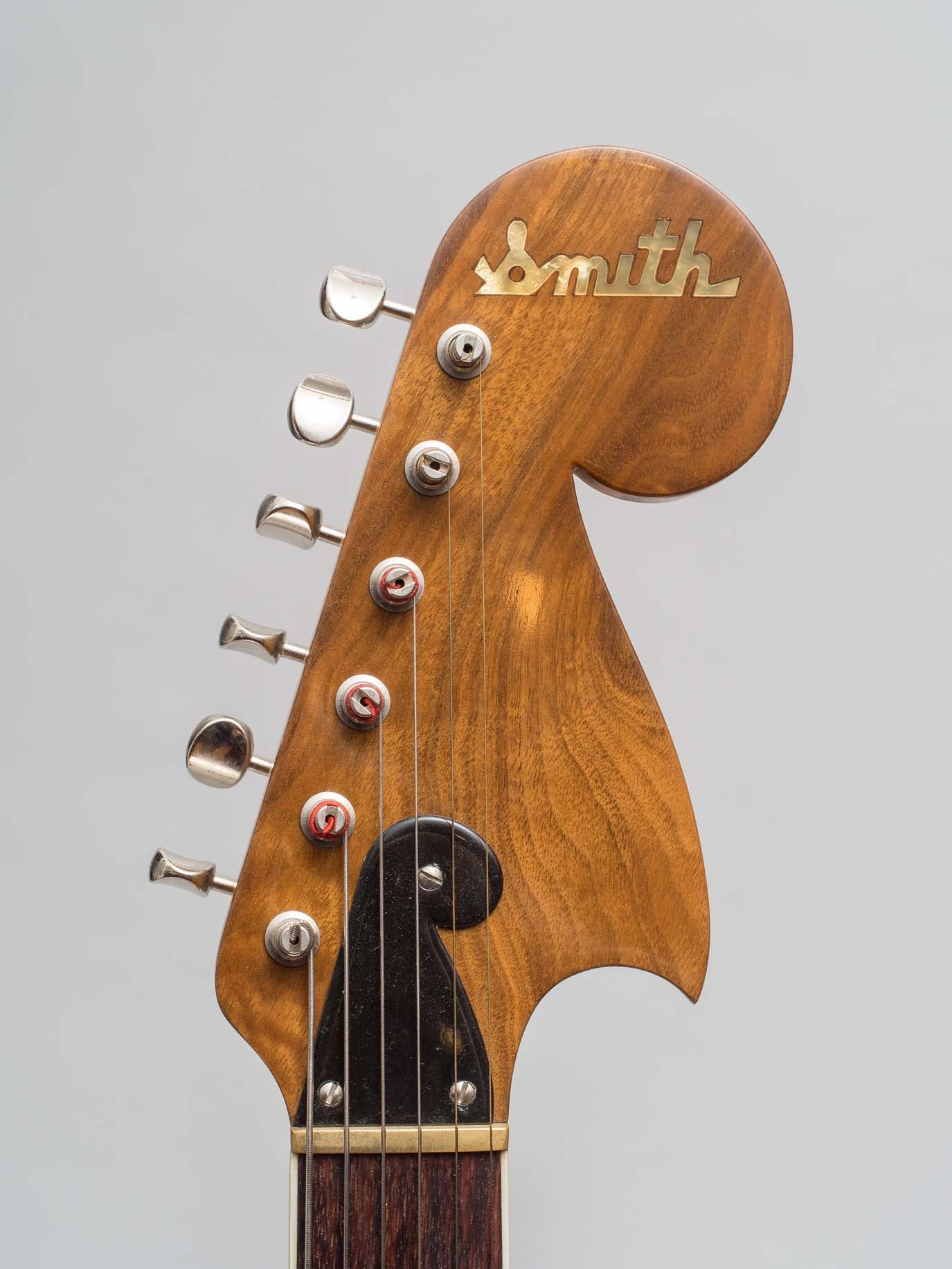 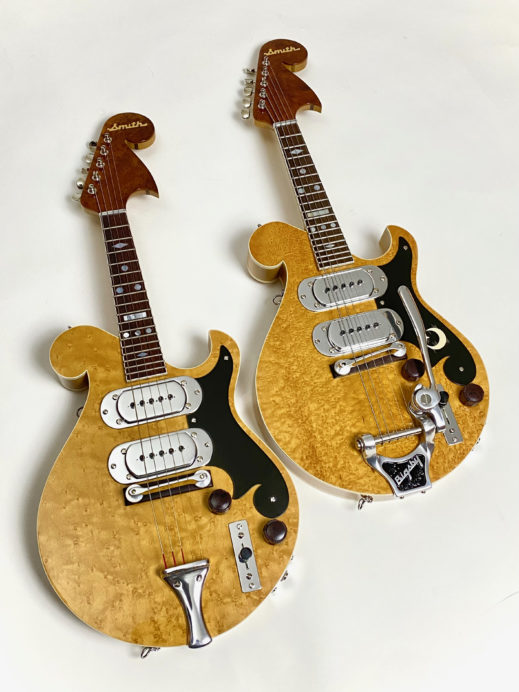 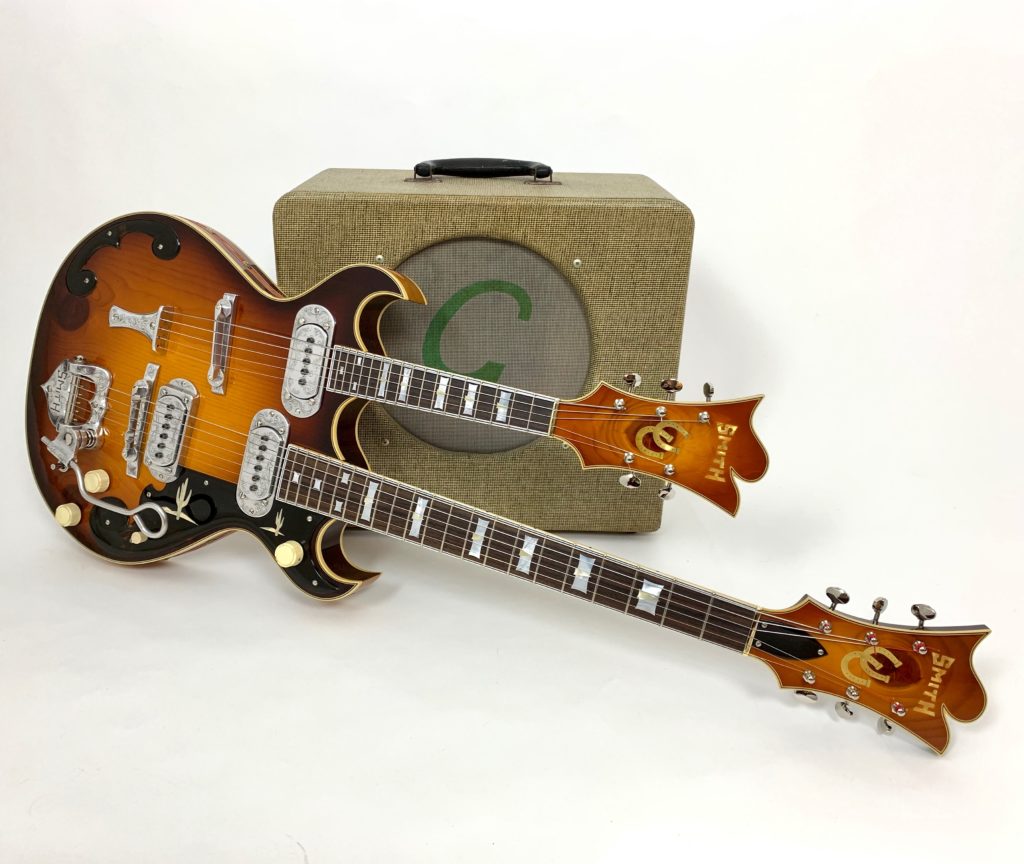 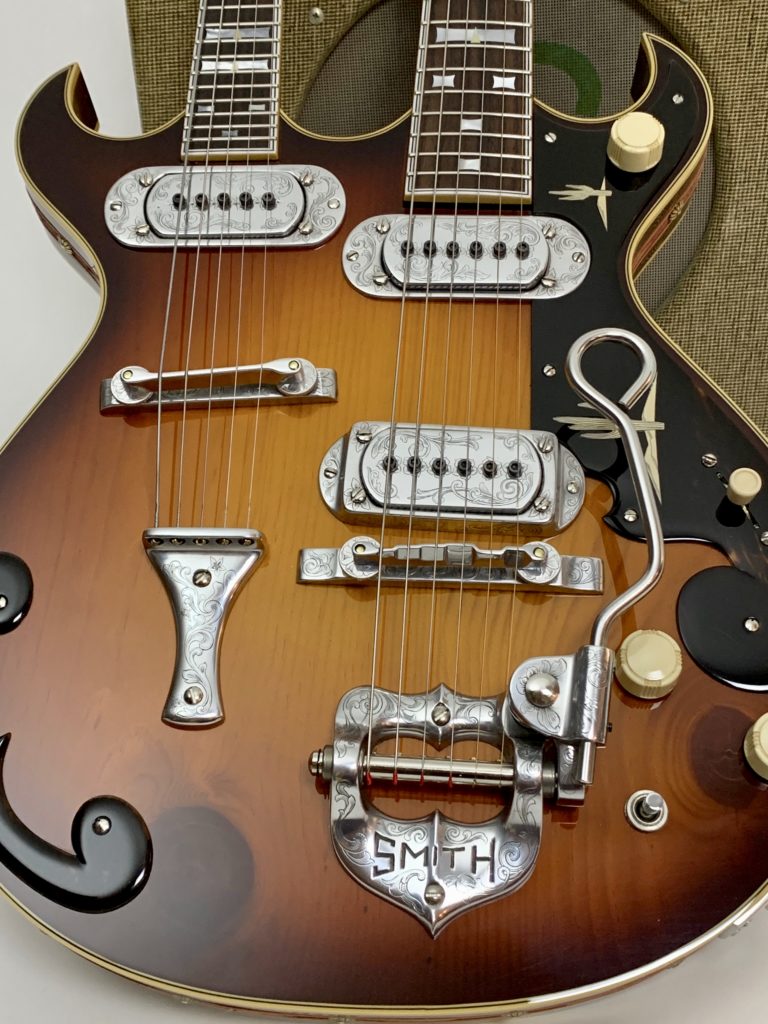 Byron said:
Not sure if I should have done this but hey ho, it's done. Maybe need a black pickguard to break up the chrome/sparkle combo
Click to expand...

bigsby pickups in a gretsch are a great thing! 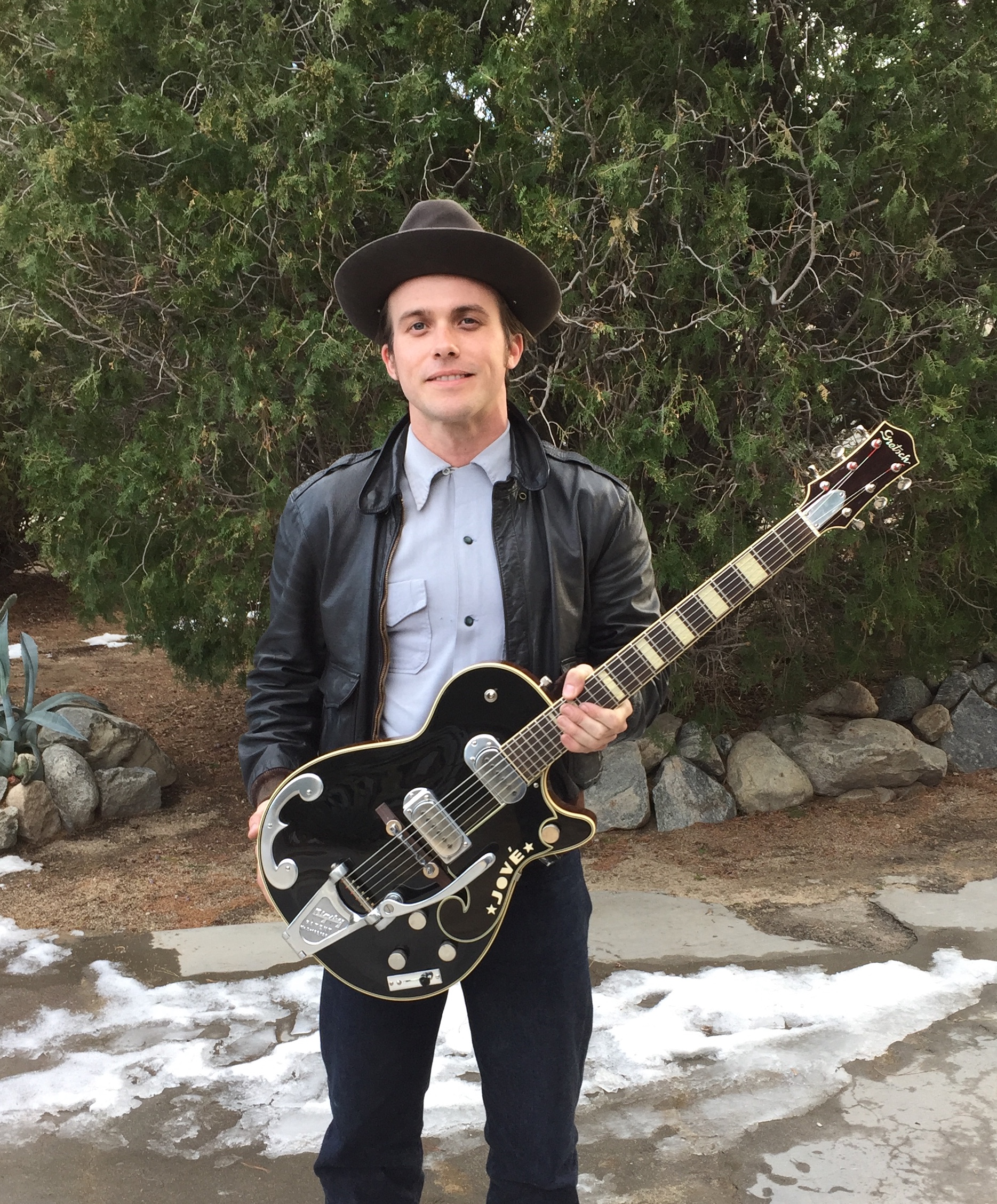 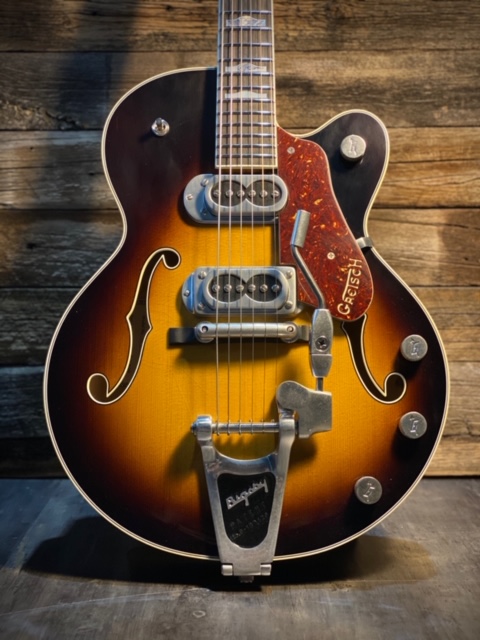 Yes, I took a lot of notes and ideas from the guitar that TK Smith built for Jove. That was the only example of a Jet with Bigsby pickups that I could find. It wasn't an easy fit either!!!
Mojo tones version aren't aluminium. Hm. Beautifully made though and highly regarded by some.
B

Plus I am a huge Grady Martin fan. But TBH, these Bigsby guitars have that downright ugly school desk lid vibe. Or Daddies making monsters in the back garden shed thing.....and I think that's why we like them!?

Byron said:
Yes, I took a lot of notes and ideas from the guitar that TK Smith built for Jove. That was the only example of a Jet with Bigsby pickups that I could find. It wasn't an easy fit either!!!
Mojo tones version aren't aluminium. Hm. Beautifully made though and highly regarded by some.
Click to expand...

holy shheeepnipple, NOT MADE of Aluminium?? Then what the hell are they constructed of??

Byron said:
I'm still trying to like the pickups. Oddly unbalanced volume me between top and bottom strings in spite of adjustment. They're very low output and blat when raised to be close to the strings. I hope I'll find a way with them, I'm a fan of old recordings made with this style
Click to expand...

Yep, Pyramid Nickel roundcore hand polished strings. (Unwound G though, I'm a bender) And I'm pretty sure that the Mojo version isn't aluminium, it doesn't have that silky sheen. I think I need to spend a bit more time with them
B

I kept the original 250 pot and 223 cap. Would that be appropriate for these pickups? Would love to hear some samples from Svenslim's guitar. Looks beautiful

TV the Wired Turtle said:
That said, no one owns "bigsby" really. Gretsch technically does
Click to expand...

They sold it to Fender a couple of years back.
J

I smiled when you said 60th birthday. I guess we are all old rockers. I'm closer to 70 than I am to 65 and still enjoy getting out and performing. Course I just refer to myself as a strummer and a croaker but still having fun.
Happy Birthday. Enjoy your new gift.
B

I just played through a few amateur Grady Martin pieces through my Vibro Champ, and it made me smile. Being so low output, they didn't grab name straight away in a rehearsal room. But I know they can do it