I want to hear some of your bad experiences with by sell and trades, I’ll start.

Last week it was plus 40 out and the old Honda left me in back of a feild miles away from home . All the electronics where completely dead .

On Friday I was still mad so I posted it for $2000 since I put work into it and paid to get it’s paperwork transferred to my name .

I explained I had work done and the bike was still a “hit & miss” with the safety needing to be bypassed.

I also mentioned how it shut off on me but I have videos of it running just before it happened.
In the video you could see the bike smokes but it’s an 86 .

The guy shows up at my work unannounced and I had to go to the farm where he saw the bike smoke run and drive because you know , the Honda started first try after sitting for three days.

He was happy with it the way it was and sent the e-transfer for 2g .

On Monday he starts complaining about the Honda and I was confused about why he was telling me what I told him on the farm .

Tuesday he tells me he doesn’t like this deal anymore and my response was “that’s to bad, I got paid and so did my bills. You have two options 1. Sell the bike or 2. Take it to his friends who works on bikes.

He even accused me of lying about taking it to the shop where I sent pictures that had time stamps of it at the shop .

Later I got more messages even swearing at me but it gets better.

Yesterday I get a call at 4:30 am that I ignored then I got an email from him and he’s actually threatening me 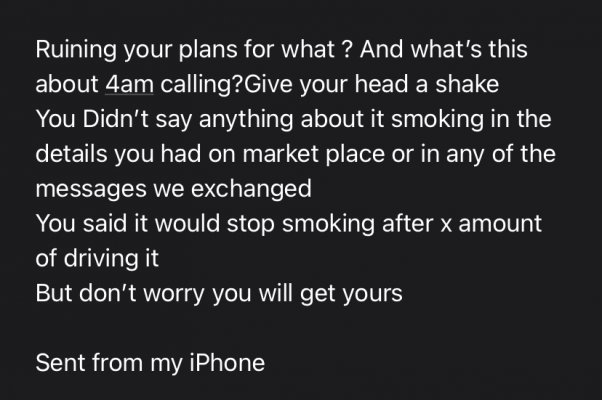 You saw it smoke , I never made you buy it and now you are mad because you made an irresponsible financial decision .

And it’s not my fault you don’t know how to drive , I can drive from point A to point B aprox 30-40 minutes without it smoking.

To paraphrase Ben Franklin, neither a buyer nor a seller be.

We’ve all had good and bad experiences. I’d rather buy from a business with the resources to back the purchase. Selling? I try not to. I’d rather give things to someone who needs them or donate them to a worthwhile charity. There’s no buyer beware if it’s a gift. It is what it is.

I once sold a case . Wanted $75 for it . Guy responds enthusiastically regarding the price . He just can't get over how inexpensive I'm selling it for . Boast ing again what a great price I'm asking .
I suggested to bring the guitar with him to make sure ... fits like a glove ..... guy says at the sale .....
would you take $70 , that's all I brought with me ....... a few choice words came out of my mouth

I once sold a case . Wanted $75 for it . Guy responds enthusiastically regarding the price . He just can't get over how inexpensive I'm selling it for . Boast ing again what a great price I'm asking .
I suggested to bring the guitar with him to make sure ... fits like a glove ..... guy says at the sale .....
would you take $70 , that's all I brought with me ....... a few choice words came out of my mouth
Click to expand...

Did you take the $70 or tell him to pound sand?

No clue I didn’t answer

wabash slim said:
Did you take the $70 or tell him to pound sand?
Click to expand...

A couple of years ago wife and I had a car we were looking to sell. It was probably worth $1500. We had put a tranny in it, and tires and breaks were also new. But I felt charitable and just wanted it gone quick. I had more time than money and that is what was important, just getting it gone off the property. So it was $500, as is, needs nothing, all maintenance is up to date.

So the first group of people came look at it. They were hillbillies. It was for Granny to drive. Jeb had brought a guy that was their "mechanic." He was also a hillbilly. He was going to do their "negotiating,' Without even checking the oil, he asks if I would take $300 for it. I told him no, that is what I can get for scrap. but now it is $1500. because now I am madder than ol Yeller. So he says, "Well I had to try." I told them, come back without Jethro and we can talk. While they were there, standing around the car like fence posts, a second guy came along. He bought it instantly right in front of them. He ended up friending, and we see he has driven the car for years now without a problem. Changed his life. Got him off the bus and driving to work. He also drives it all over the state on his off days.

Not really a horror story, but a good life lesson. Don't screw deliberately with someone that is trying to do you a favor.

Sold two guitars this week on Craigslist. The first one I dealt with a no show guy then the next guy clearly spent to much time on the Internet and knew nothing about guitars..” I think this guitar has neck dive” It was a 100% stock Fender Strat…He had a dozen way off base comments. He did buy it, so I just smiled

The next guitar, a guy e-mails me and he lives 50 miles away. His email contains 7 or 8 very well thought out questions about the guitar and it’s upgrades. I gave a detailed response and he says he will be at my house in an hour. True to his word he arrives and we have a great time talking guitars. What a nice knowledgeable guy. After we spent a long time talking he pays cash for the guitar and heads home.

To paraphrase Forrest, Craigslist, it’s like a box of chocolates, ya never know what you are going to get.

Oh ya, neither guitar was a Gretsch..

Shock said:
A couple of years ago I had a car we were looking to sell….
Not really a horror story, but a good life lesson.
Click to expand...

Many years ago (1968) I was a freshman in college. A number of us in the dorm pooled our resources to buy a car with out of state plates for $50. What could go wrong with that?

I can only imagine what college would have been like as a freshman in '68 with a communal $50 beater. That would make an awesome movie. Seriously.

We had an old Chevy on my Air Force base that we couldn't take out past the gate. No plates, no insurance, no floor. Nobody really owned it and there had to be a dozen sets of keys for it. Park it anywhere when you were done with it tho it might not be there when you leave. We'd load it up at meal time with the crew then drive it back to the shop. You'd put gas in it if it got too low just out of guilt. Gas on base was cheap so it wasn't an issue. I never heard of it running out of gas or not starting. It's probably still there.

Bought a ten-year-old Rambler rust bucket for $30. Put 30K on it in a year doing delivery work. Tuned it up twice out of guilt---it didn't run any better. Add in a couple sets of $5 tires and the $1.50 it cost to have the clutch pedal welded back together. Massive rust holes, hideous blue, and no self-respecting woman would be caught dead in it. Went thru Lake Effect snow with no issues, always started even in sub-zero weather. My little brother bought it off of me for $30, added another 10K on it, and then sold it for $60.

DougWheeler74 said:
That would be about $425 in today's currency, now you're talking Streamliner! (Hey, I own 2 & love them).

In 68’ we were drag racing on the street Friday and Saturday nights with a 65’ Chevy Malibu SS that had a blueprinted, balanced 427 L88 in it and a full fiberglass tilt up single unit hood and front fenders. It had a straight front axle and a chopped down rear axle with wrinkle wall slicks with the interior of the trunk cut away to make room for those monster slicks, plus a full roll cage. In 68’ this “street legal” car ran in the 11’s. Darn fast back then. We also ran at the local drag strips, Orange County and Irwindale.

radd said:
” I think this guitar has neck dive”
Click to expand...

..... thats because you left it right next to the bucket of steam

That's the best laugh I've had in a while

I paid for two guitars on ebay-calssifieds that I never got. Never got my money back. I posted the endless stories elsewhere here.

Sold a partscaster for 90 EUR to someone who gave me a negative feedback on ebay because the relicing was not on customshop niveau. On a 90 EUR guitar! Can you imagine?

The most un-nerving story was when I won a Peavey 5150 combo on an ebay-auction for EUR 350.
Obviously the seller was not happy with my low bit winning his auction.
So he did not ship it for 2 weeks.
He told me sad stories about his ill mother and having had no time to care for the shipping.
Then he told me that DHL has dropped it when taking the amp from his home.
Then he wrote that it is unrepairable. Refused to send some pics.
I threatened him with my layer.
He wrote a long mail to me telling me about his divorce, his illnesses and his bankruptcy...
Gave up on that after two months or so. What an idiot.