Hey, we don't get them because we'll sound better. We get them because they make our wall look better. Even more important in these zoom days! (I am actually a lawyer with a nice, real guitar wall for a background.)

CheapGretschLover said:
I really just wanted to comment on the great quality of budget-to-mid-priced gear made available these days, and show a regular working class band and the mid-priced instruments they used to make some good music.
Click to expand...

One of my new fav youtubers is Chris Buck of Cardinal Black. A very nice well behaved young man but a beast on guitar. He has been playing a Yamaha Revstar custom shop model for the last few years. He recently acquired a Squier Jazzmaster for live use(not his first Squier) Keeping his vintage gear pristine has nothing to do with it.

So funny.
I realized I'm a great fan of inexpensive gear but I spent 30 years of my music career (if it could be called that way playing bars and small clubs) playing and recording with 6120, '64 SG and '72 Telecaster (for the most) through Bassman, late '60s Hiwatts and '64 Super Reverb.
Blues changed everything though. I discovered the power of the fingers (maybe... ).

BuddyHollywood said:
There is no Pro-Line equivalent to a 5422. To my ears a 5422 has a great, balanced, musical sound that I love. It's one of my favorite sounding electric guitars. I was hunting for one when I stumbled on a Casino that I ended up buying instead.

The inverse is that great gear is also usually great sounding. If Gretsch made a Pro-Line G6422 I'm sure it would sound even better to most of us than the G5422. The bridge pickup would be in the right place and the pickups would be HS Filtertrons.
Click to expand...

Dude, you have a Casio too! I love my Casio

I’m in the camp that inexpensive doesn’t equal poor quality. I’m taking huge pleasure in playing my Squier Esquire.
It is a Sweewater exclusive with a pine body and the original 3-way selector settings. I love the sound and the narrow but full 9.5 radius maple neck.
I paid $400 about eighteen months ago. 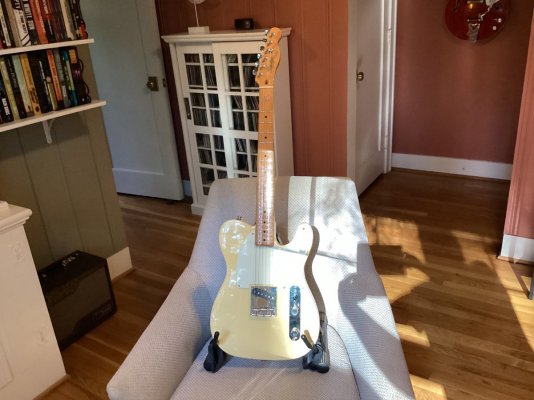 Synchro said:
I think it depends on a lot of variables. If I was to go on the road as a sideman, playing in some backup band, I would probably buy a couple of relatively inexpensive Teles and use them like a government mule. The idea would be to have three guitars which would be functionally identical, and could face the wear and tear of road life, without undue concern on my part.

OTOH, if I were a headliner, then I would probably use production. Pro Series Gretsch, but these guitars would be protected and cared for zealously. If I went to see Chet in concert, and he had came out with a Telecaster, I would have been disappointed, and I think that a name act probably should stick to the instruments they are known for playing.

OTOH, the guy playing in a backup band isn’t going to have the same sort of track record to uphold. Likewise, session musicians, although they tended t9 use name brand instruments, weren’t above using whatever they needed, in order to get the job done. A lot of classic recordings were done on Gibsons and Fenders, but there were some Danelectro guitars and basses used on major recordings, and these instruments were considered all but disposable, at the time.

There is, however, a functional matter that could easily be overlooked. Some budget instruments are poorly shielded, and while that might be an irritant for home use, It’s a deal breaker for recording work, or performances in a large venue. If I were going to use a budget instrument, I’d give the shielding a serious look.
Click to expand...

Excellent point, that las one. As much as I love my electromatic Gretches, I will get the TV Jones wiring and pots upgrade kit into one of them so I can go into the studio with confidence. I do have my eye on a used 6122 that looks like a serious upgrade from the Electromatics,and may replace one of those with it. I'm really glad that Gretsch made that sound available at very reasonable prices, that sold me on them and now I'm "movin' on up"!
R

wildeman said:
Dude, you have a Casio too! I love my Casio

My white with gold 5422 is amazing to play and, according to my audiences, the coolest guitar they've ever seen.
R

Byron said:
I think it's well known, expensive gear doesn't make you sound good. We all fall for it (and it's part of the fun)... 'If I buy that expensive piece of gear, I'll sound better, look cooler, be more inspired, impress my pals etc,.'
Funny how some budget equipment from the past has become so prized.
Click to expand...

While often true, a proline Gretsch appears to be able to take more road abuse and keep on going than perhaps an Elecromatic would. However, spending thousands on a road instrument is reserved for those who have guitar techs with them.

blueruins said:
Talk about junk…I’ve heard some music is made using nothing but keyboards!!
Click to expand...

Nicely done, and I learned years ago that with some knowledge and the bravery to do the mods/improvements, inexpensive/value priced gear can be very, very good.
Regarding the Guitar used, I've yet to find a mid-priced Gretsch that didn't usually blow out of the water other guitars priced in the +$1,000 range.

Wonderland Drive said:
I’m in the camp that inexpensive doesn’t equal poor quality. I’m taking huge pleasure in playing my Squier Esquire.
It is a Sweewater exclusive with a pine body and the original 3-way selector settings. I love the sound and the narrow but full 9.5 radius maple neck.
I paid $400 about eighteen months ago. View attachment 190406
Click to expand... 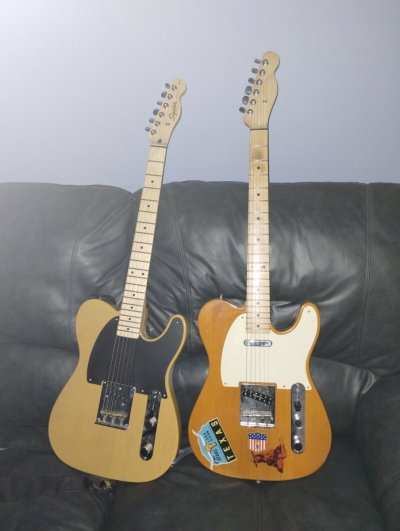 Every interest area I’ve ever been involved with has what I call “Archer or the Arrow” debates.

Of course, good is not the same as expensive. There have been plenty of diamonds in the rough, that with a bit of tweaking, can sound great. Sometimes, it’s actually the flaws that are key to a great sound <cough>5E4<cough>. There’s also expensive junk.

From a woodworking forum I used to follow: “Of course the great masters used power tools. Back then, they were called apprentices.”

A great painter could turn out great results whether Alla prima or glazing/layering, oil or acrylic, etc. That doesn’t mean they would create the SAME painting.

Many of our choices are simply a matter of selecting the palette we enjoy working with.

Personally, ergonomic issues have become very important to me. I’ve learned that “playing through the pain” is an ever-spiraling crock ….

Many also find a guitar that looks, feels, or sounds right is inspiring. Even the great Mark Knopfler has said that the instrument choice takes the music in different directions. Sultans of Swing was written for a resonator guitar, but came alive when he got a Strat.

In short (ok, it’s way too late for that), fingers or equipment is what’s called a “false dilemma fallacy”. It is not an either-or choice. There are many dimensions to tone and creativity, and trying to reduce it to a binary choice is absurd.

I’ll also add that when trying out guitars over the years, I usually end up picking something different from what I thought I wanted. Sometimes the music comes from unexpected directions (much like personal relationships).

blueruins said:
Talk about junk…I’ve heard some music is made using nothing but keyboards!!
Click to expand...

In this little Fonky demo tune...

... Unexpectedly composed afterwards by a Keyboardist friend, my guitar was : 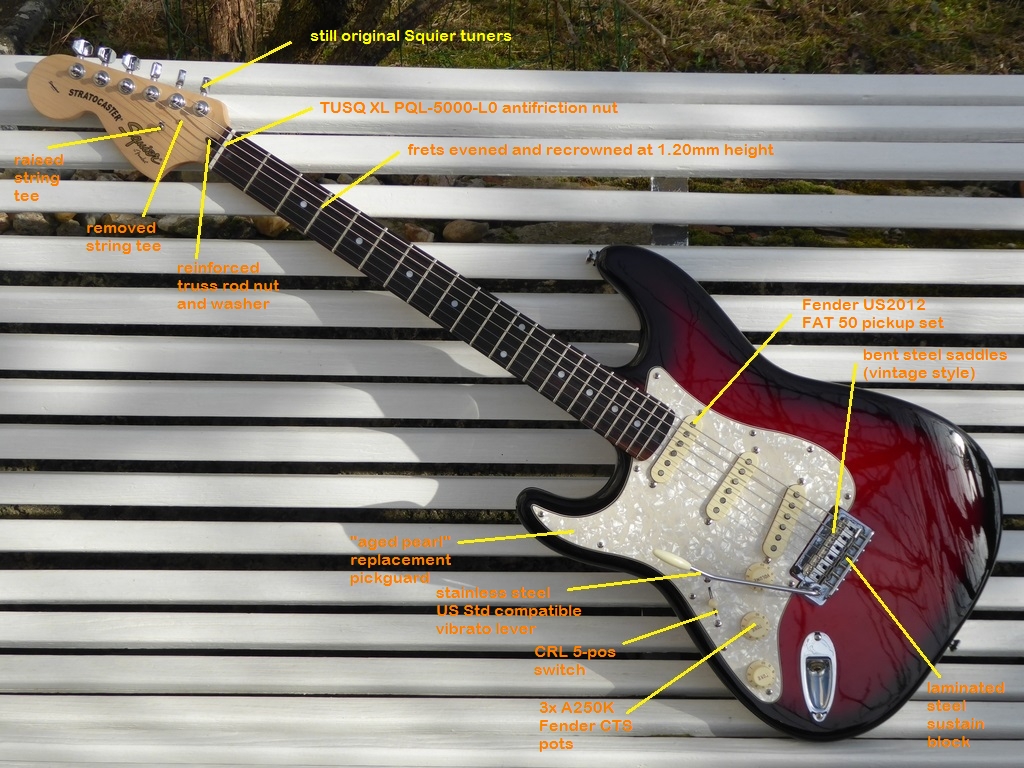 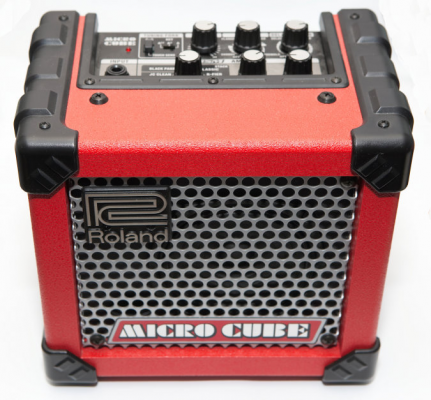 My wah pedal was : 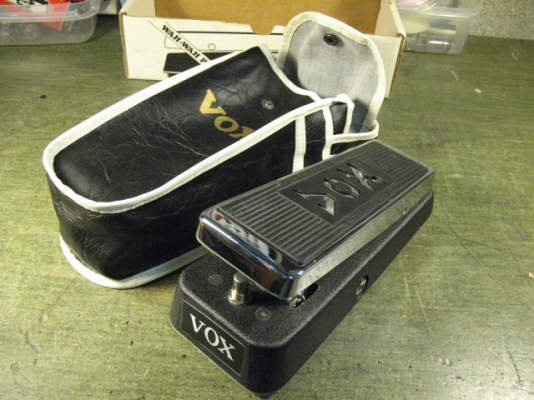 Some pretty cheap gear giving the illusion of a "Pro Sound", right ?

A friend just lent me Jimmy Page's biography. Did you know Stairway to Heaven was played on a Harmony twelve string?

Synchro said:
If I was touring, I would want relatively inexpensive guitars that could be easily replaced and wouldn’t be a tragedy to lose.
Click to expand...

That`s what I think. I lost or destroyed so many fine gear over the years on gigs that I decided to leave the unreplaceable stuff at home and protect the stuff that I gig with with massive flightcases.
Vintage guitars or proline Gretsch are gigged only on sundays.
You must log in or register to reply here.
Share:
Reddit Pinterest Tumblr WhatsApp Email Share Link