Gibson SG, but which one?

Home use only
Any input is welcome...Thanks

I have a 05 special with a fat neck that I like just fine.
I have 2 tribute Les Pauls that I am very happy with and would think the SG would be just as nice.

GVDobler said:
I want a Gibson SG in cherry. I started out just to get a simple SG Junior but you know how that goes. Info overload and muddy water … (and) there doesn't seem to be much difference in the actual guitar.
$1,299 - $2,399

Home use only
Any input is welcome...Thanks
Click to expand...

That’s a pretty wide price range you’re considering. My suggestion is to find something you like the looks of that’s comfortable to play. Consider used too. When you find a good one, all it takes is a credit card that still has some credit line left, imagination, soldering skills, and time. Here’s mine. It started its life as a Gibson SG Robot with tuners that violated all of Asimov’s Laws of Robotics. Now with Gibson tuning keys, CTS 500K pots with treble bleed, and TVJ Classic and Classic Plus pickups in drop in humbucker mounts, it’s perfect… at least for me, at about a thousand all in. 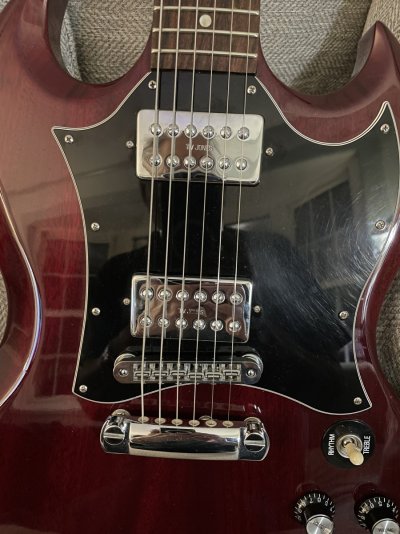 Well , maybe some have you noticed that I've been hinting about a NGD . My good old friend @larryb had almost talked me into buying @davenumber2 SG a few months back , but the timing just wasn't right . 2 weeks ago I was just browsing Chicago Music Exchange and this guitar just spoke to me...

Gibson SG Standard ‘61. That’s the one you want. It’s worth the coupla extra. And the small guard just looks cooler. I LOVE SG’s, for the record(pretty much the Gibson Telecaster).
And, I agree with @Emergence - buy used and save some $.

I have a 2020 SG Standard in ebony thats fantastic.
Id go for a Standard, or the Standard 61 reissue if budget allows.
Unless you want P90s.
L

SGs are pretty simple.
The first decision is P-90s or HBs? Which HBs?
Batwing or smaller pickguard?
Standard tailpiece or those chrome sheetmetal things (can you tell I don't like them?)

There is some variation in the neck profiles so you should play them to decide what you like.

As others suggested, I'd watch for used ones,
I hesitated and missed out on a white P-90 version for $500, four hours after it appeared on FB marketplace it sold. Still kicking myself.

I wanted a new one and a year ago bought one of these:

Retail is $1100 and there was a discount coupon.
I like the Black Satin finish and batwing pickguard. Sounds great, feels fantastic. Flawless construction. Unique model, rare.
GC/MF SE, sold out but they may get more?

Still looking for a P-90 version, I think the combo of SG and P-90 is magical.
L

Same bout, same scale. Differing from Gretsch where Junior indicates body size, Junior in Gibson parlance denotes the use of one pickup(Special would be the 2 pickup version). It’s generally used to mark the difference in stripped down versions of the SG, Les Paul, Les Paul DC and perhaps a few others I’m not aware of. 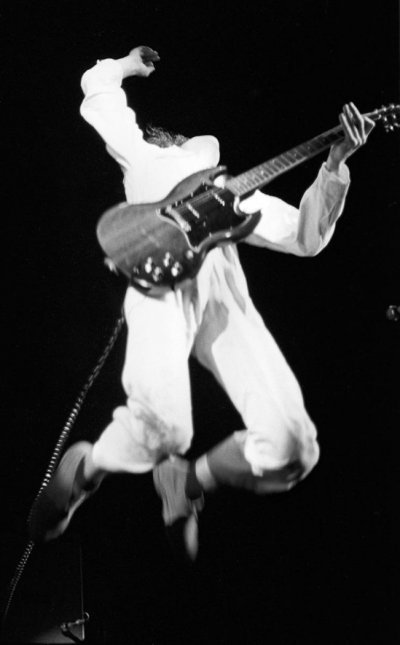 Don't know about the slim taper neck. Guess I'll see if a local shop has one to try.
Thanks for the input.

Go with your first idea, Junior..... All SGs have the same body.

In '69 and '70 the Who played in Cleveland twice, six months apart. I got to see both shows in a 3000 seat auditorium, it was loud. They played Tommy straight through both times and I had no idea how lucky I was to see them.

The small-guard Junior is my favorite among all SG models.

Since I am a one-pickup-guy it would be the only one of the bunch that fits my taste. But it is your next guitar, not mine. Right?
I had the pleasure to play an early 60ies example and it was a dream to play. I would really love to own one of these one day.

At that pricepoint I suggest to take a look at other offerings, too. Maybach has the Albatroz line which might be a veritable alternative.

A P 90 -guitar is always great to have in your stable.
It is worth to try these in person because of the different necksizes. Some are very slim, some are quite beefy.

Some SGs are prone to neck-diving. So if you are uncomfortable with this I really urge you to try the guitar in person to avoid a model like that.

Although I heard that in former years Gibson`s QC for their non-export models seems to be better, I would take a look at this aspect, too. But maybe the new management has a better hand on this. I have only experiencs with older models.
Good luck with your hunt.

If I had to buy it now, I’d go with the “61 Standard with the vibrola.
But I have a Special with the baseball bat neck that’s my best guitar ever.
To me the choice should always been between P90s or not.
L

The hunt is fun.

Choose what you want.

You may want to deal with GC to get a 48 month finance deal for the holiday.

I don't know if the finance deal is till the end of the year.

Neck profile is the biggest factor after the pickup selection. The other items are cosmetic. I greatly prefer the rounded profile which is a bigger neck. It’s the reason I haven’t gotten a P90 SG.

SGs are the most comfortable guitars on the planet in my opinion, good luck!!

Yeah, that's one thing about SGs, especially if you're looking at used ones. While the bodies have consistently stayed the same size, they've come with a wide variety of neck profiles over the years.

Unless you're one heck of an SG scholar, it's hard to know what you'll get with a used one until you sit down and play it.

I've got a '61 Standard reissue with the Maestro Vibrola - and I'm totally happy with the Slim-Taper profile. I consider it a very playable neck, but if you're a fan of the baseball bat feel, it might not be your first choice.

SG's are dirt cheap used, you can probably pick up a standard for the price of a tribute (though like everything else, they have started to go up in price).

Snagged one cheap during the 'demic... Loved that it wasn't red / black / white...

Having come from larger guitars, I still can't seem to play one seated (too thin), but snagged one anyway for when I want to channel my inner Angus (or Ruyter