Electromotive made in China?

I have a 2018, 5420T in Fairlane blue, it’s made in Korea, but I’ve noticed the newer ones are now being made in China! Why? Do the Chinese ones have the same build quality, fit and finish, and sound quality as the Korean ones? If not what are the differences?
Thanks,
Paul

I have both Japanese, Korean and Chinese (recent) : no quality issues...

Electromatics' quality is great no matter where they're made.

Electromotive is the GM Division that builds locomotives.
W

As a side note, I noticed that Gretsch removed then manufacture identification from the website image on the G5420.

My experience has been that Japenese and Korean built guitars have always been great builds with excellent fit and finish.

My experience with Chinese is hit or miss. I have had beautiful builds and builds that were so bad they were unplayable. One Gretsch had fret ends sticking out so far you could cut yourself on them. Another Gretsch had a set neck so far off that the 6th string was off the edge of the fingerboard where the neck met the body.

My suggestion is that you closely inspect any Chinese made guitar as you should with any guitar made in any country. 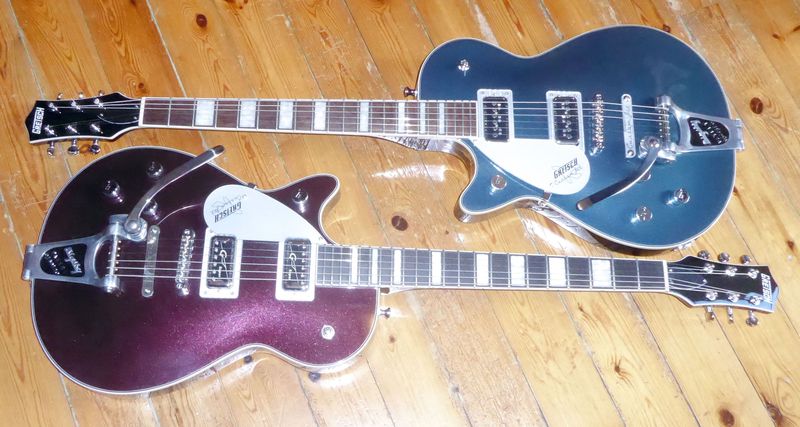 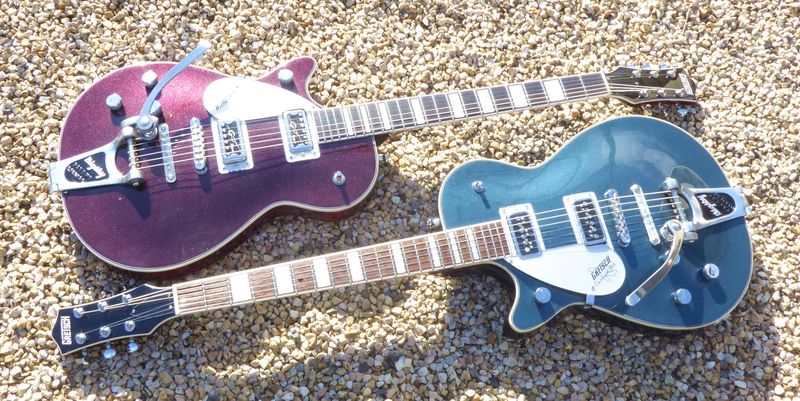 I have a G5420T made in Korea (around 2015) and a G5657T made in China, purchased last year. Both Electromatics, both good quality and play well.

The Chinese made guitar (Broadkaster Jr. style) felt a little clunky, but after I changed to a solid bar bridge, TV Jones PowerTrons, better Bigsby spring, better tuners, it feels more solid and sounds much better. So now my $800 guitar is a $1,300 guitar.

Neither of this guitars are up to the level of my G6128-VS made in Japan, but that's now nearly $3,000 new (I found a used one for $1,900). I don't think that takes away from the fact that I love the Electromatics and really enjoy playing them. But I did have to do a few hundred dollars worth of upgrades to be happy with them, and a little more TLC for the Chinese guitar than the Korean one. Just my experience.

In a few years they’ll be made in Pakistan and everyone will relish the good old days when they were made in china.
S

I not only have a Korean made Fairlane Blue 5420, I also have an orange 5420 also Korean made, and Newark St Guild Starfire V, also made in Korea. All of them are really nice guitars right out of the box. But with most production guitars a little handwork by a competent luthier can take them to the next level. All three had the frets leveled, and a pro set up, the orange 5420 T had all the electronics changed out with TV Jones, including two new TV Jones Classic Filtertrons. That took all three from great to exceptional.
Paul

I mean...how many people even know that? (About GM that is.)
N

I bought a 5422TG made in China. I also purchased a 5410 Rat Rod made in Korea within the return period, I kept the Rat Rod as I thought it was better quality. Both had issues with the strap locks. This is my first Korean made guitar. I also find Indonesian made guitars to be good quality although I don’t know if Gretsch makes any there.

In fairness, I msy have liked the 5422 more than I did if I hadn’t chosen the white. It looked great and was a bit more alive, but I didn’t like the painted neck, I also preferred the neck profile on the Rat Rod.

Need1More said:
I also find Indonesian made guitars to be good quality although I don’t know if Gretsch makes any there.
Click to expand...

I have a G2215-P90 from Indonesia and the build and finish is great. The pickups and electronics are NOT, and I'll be changing them.

My Chinese made 5655TG was flawless

Still added a few upgrades though

stevo said:
I mean...how many people even know that? (About GM that is.)
Click to expand...

My neighbor retired from the Chicago plant, and my Dad worked there for a short time.
Lots of foamers (railfans) are well aware of EMD.

wabash slim said:
My neighbor retired from the Chicago plant, and my Dad worked there for a short time.
Lots of foamers (railfans) are well aware of EMD.
Click to expand...

Very cool. My dad was a rail fan, his dad was an L&N station master. I had a prof at Ga Tech who worked on some of the early variable AC drive systems with EMD.

I've found that you can't beat an Electromotive for the bass line.

stevo said:
Very cool. My dad was a rail fan, his dad was an L&N station master. I had a prof at Ga Tech who worked on some of the early variable AC drive systems with EMD.
Click to expand...

When my dad was young in the 1930’s, he and my uncle walked the Long Island Railroad tracks along the Rockaway line to and from school picking up coal to heat the bungalow they lived in. Occasionally a kind hearted fireman would throw a shovel or two of coal on the tracks for them as the train passed by.

Crazy things can remind me of my dad. I miss him.

I used to work just down the road from the Electromotive factory in McCook, IL.
G

I have a 2420 Indonesia and a 5420 made in Korea. The 2420 Indonesia has 100% perfect quality and set up. Fit and finish are perfect. The Korean had to go back. The bridge was wedged on the posts. It could not be adjusted. Action was high and the guitar never should have left the factory the way it was. So you get good and bad from anyplace. Even American made guitars.
S

Funny that was a type O when I started this discussion, I ment Electromatic, not Electromotive, but the funny thing is when I got out of the army I worked there at the plant in McCook Illinois for a very short time while waiting for my apprenticeship to come in. I was a hooker, that’s the guy that hooks the cabs up for the overhead crane!
That plant is long since gone.
Paul
You must log in or register to reply here.
Share:
Reddit Pinterest Tumblr WhatsApp Email Share Link